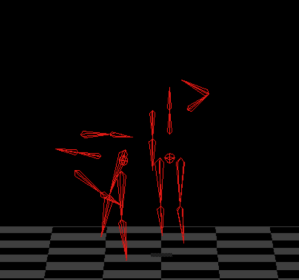 Functional: Recorded movement warmup, earlier phrases and new gesture improvisations in Integrate system.
Technical issues of creating a work flow through unlimited movement captures has been difficult. This includes rotation of movement, turning, using low levels (i.e. crouching), with a leg extension over 90 degrees. Any unusual movements that don’t match to the skeleton’s possibilities have the same response as motion capture losing a marker (to ‘shiver’ or collapse totally). This is a large loss of precision in the data, which could sometimes be viewed as an added movement ‘style’, but this was used much in the 1990’s, and seems a bit dated to continue using.

However, between re-performing my own movement (mediated by time) and recording it into Integrate (mediated by devices) it could be mediated enough to be another dancer without me needing to try hard to make a ‘different’ dancer.

Next plans include thinking ‘editorally’: whether the current movement material should be shoe-horned into a composition (I would devise an outside structure and impose it on what I’m working on so far) or keep this as a ‘study’ where I would just label each chunk and play/show/perform them consecutively. The little chunks each have different perspectives on the same vocabulary, a common thread, so imposing a structure/ meaning/ exploratory perspective to help shape the movement ideas might be useful

While the back and forth between computational thinking and embodied thinking is still difficult, it can also be useful when shifting between generating movement material and editing it. There are so many available movements, and so many ways to perform them, that it is easy to work only from habitual places. Scuddle still provides a new perspective to work off of which helps with generation. Though after generation I’m not sure how the computer can support my process as much, because there is SO MUCH data lost in the capture/ ‘avatarization’ of the computer that I am re-interpreting everything the same way I am with Scuddle and it is cognitively a very heavy load.